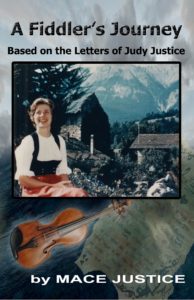 Based on the Letters of Judy Justice

A Fiddler’s Journey is an epistolary memoir, told through letters written by Judy Justice to her family. With a scholarship to study “avant-garde music,” Cincinnatian Judy Justice sailed to Germany in May 1960 to break traditions and taste new personal and professional freedoms in a country that was experiencing a rebirth of freedom of its own.

Even more significant; however, Judy’s trip took place a mere fifteen years after the United States and Germany had been at war. World War II ended in the European theater in 1945, leaving much of Germany destroyed and its people trying to rebuild their infrastructure and regain pride.

As you read A Fiddler’s Journey, you will experience: